Aoibhe Fleming (3rd Year Class O’Riordan) has been representing her country abroad. Aoibhe has travelled to Norway to represent Ireland on the U17 women’s Irish Soccer Team in round 1 of the Euros. Ireland beat Hungary in their opening Group 1 game and went on the defeat Bulgaria 3-0 thus securing a place in Round 2.

Aoibhe is a fantastic role model to all and an excellent representative from Lucan Community College and the wider community to represent Ireland at an international level. Best of luck to Aoibhe and the Ireland U17 squad as they take on hosts Norway on Friday. You can get the latest updates here.

Class Valentia created and designed their own Early Christian Monasteries through some beautiful artwork. Well done! Great to see examples of active learning in Lucan CC. It would take more that covid to thwart the German exchange Lucan CC enjoys with Gymnasium Münchberg. And so it was that on the occasion of its 30th anniversary the exchange took place virtually. As Lucan CC principal Diane Birnie said to the cameras „Nichts kann uns stoppen!“ ( “Nothing can stop us!”). 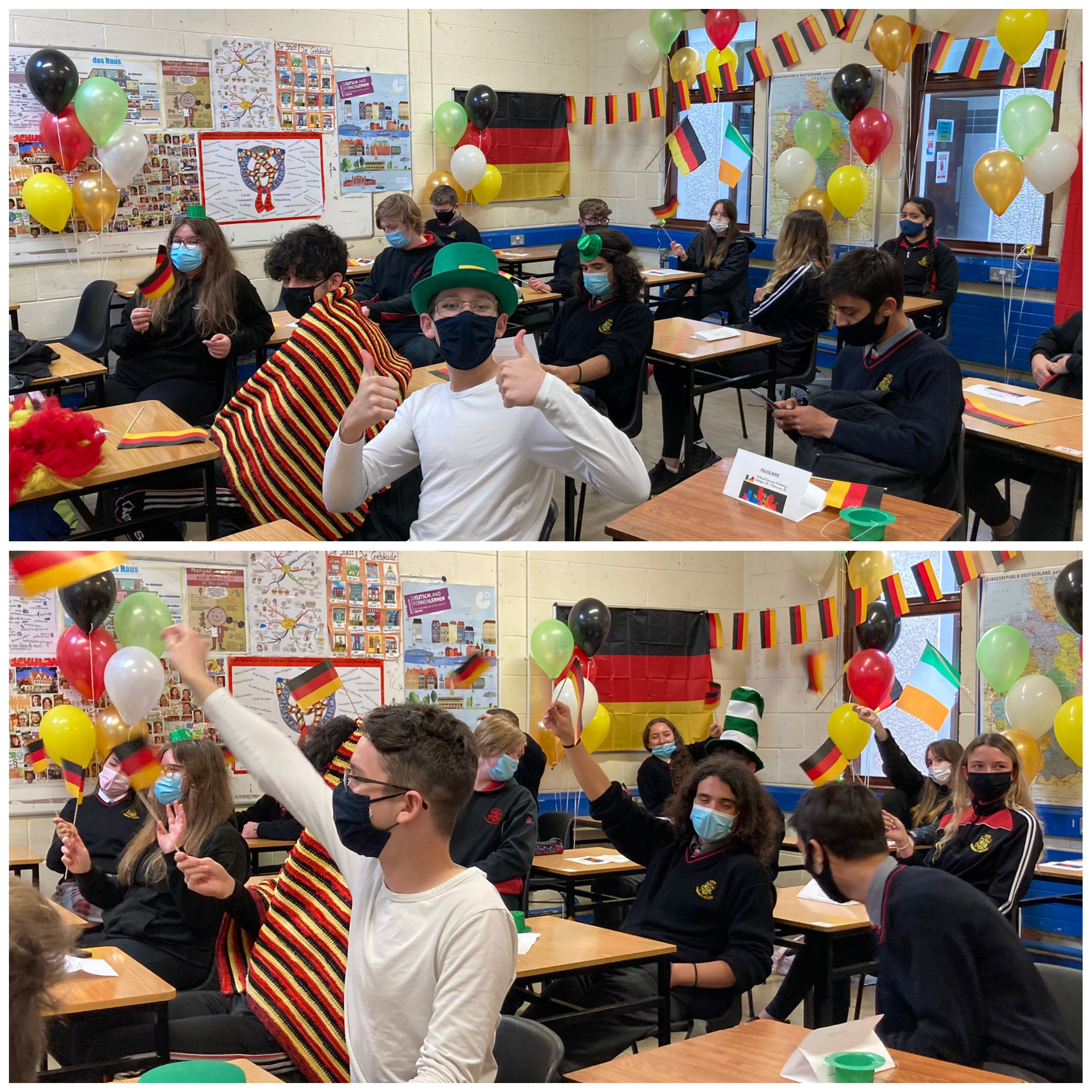 At the opening ceremony students introduced themselves as teachers gave encouragement „Traut euch einfach!“ (“Have faith!”). The ceremony included words of praise and encouragement from principals and former principals, and a message from former student Nellie Woods who now works with Post Primary Languages Initiative.  A letter from President of Ireland, Michael D. Higgins was also read out in which he his “congratulations on arranging such an innovative event”.

Over the course of the exchange students attended classes in Lucan CC in areas of History, Geography, Music and Celtic Art. Jack Harte, a former Principal of Lucan CC, also conducted a poetry reading. The Irish students each worked alongside their German partners to practise GAA and soccer skills, do some baking, singing and dancing. The virtual exchange was reported on in the German newspaper Frankenpost whose reporter Claudia Serbert said „Was in Harry Potters Zauberwelt funktioniert, geht diese Woche auch im Gymnasium Münchberg.“ (“What works in Harry Potter’s Magic world is also possible in the week in Gymnasium Münchberg.) You can read the article in full  here.

There were also more formal opportunities for students to develop and practise their language skills through making PowerPoint presentations on language and culture of Ireland and researching Irish artists. Students were also set a project to work on with their partner in preparation for the second leg of the exchange which will be hosted by Gymnasium Münchberg in February.The event concluded with a farewell ceremony packed with music, quizzes and a wealth of memories of the week together virtually.

Well done to the German department on the super-efficient organisation and thank you to all those who continue to make this exchange such a worthwhile experience for our students here in Lucan CC and in Gymnasium Münchberg. The wait is almost over! Basketball Ireland have announced that League games will begin after the Midterm Break. Training for under 16 and under 19 boys and girls has started with a great uptake of almost 100 students. This shows how much extra-curricular activities have been missed by students in Lucan CC. It has been great to see the return of many players as well as a good cohort of new recruits. Training for boys is on a Monday at 4pm in the gym and is being coached by Mr C. MacGrianra and Mr K. Clancy. Training for girls takes place every Tuesday at 4pm in the gym with Ms. L. Quirke, Ms. Dowling and Ms. R. Doherty. This is the last week for registering players so if interested please contact Ms. L. Quirke ASAP! Our 3rd Year students will attend a study skills and Mental Health workshop in Monday 15th and Tuesday 16th November. In this workshop they will cover topics such as: Managing emotions, Building resilience, Finding balance and minding yourself. What a great opportunity for these students at such a crucial time for them!

Transition Year Students Volunteer at the Academy in Lucan Sarsfields

While many are enjoying a much deserved lie in on a Saturday morning, some of our Transition Year students are helping develop football and hurling players of the future at Lucan Sarsfields. Well done to Sean McGowan, Conor Smullen, Lee Murphy, Josh Murphy, Daragh Kenna, Rory Egan, Eabha Lillis, Lauren McGivney, Robert Keher, Cormac Coffey and Milly Hughes! Led by development officer David Moran the students help out in the academy which caters for boys and girls aged four to six.

To acknowledge National Porridge Week which ran from the 4th to the 10th of October, our first year Home Economics students prepared their own delicious granola.

4.      Mix the porridge oats, seeds, nuts and dried fruit together in a large bowl.

5.      Add the melted syrup and coconut oil to the bowl of dry ingredients and stir well.

6.      Place greaseproof paper on a flat baking tin and pour mixture onto tray and spread evenly.

8.      Allow to cool and place in an airtight container.

9.      Serve with some milk or yoghurt and fresh berries for a healthy, balanced breakfast!

The application form for 1st year 2022 is now live on our website from 1st October. Closing date is Friday 22nd October. Application forms will also be distributed to feeder schools.

We are currently recruiting student journalists who will contribute to this Newsletter in the future. The team will be introduced after the mid-term break. Look out for exciting articles and the student voice of Lucan Community College in the weeks ahead!