By Stephen Brett in Awareness Raising, News on September 11, 2019. 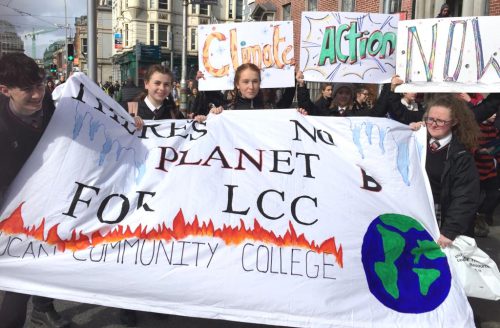 Amnesty International will be presenting the Ambassador of Conscience award, its highest honour for human rights work, to Greta Thunberg, the Fridays for Future movement and all other school strikers in New York on Monday 16 September 2019. Amnesty chose to present this award to Greta Thunberg and other school strikers to honour their activism and leadership on climate change, which has mobilised more than one million young people from all over the world

Amnesty Ireland will be presenting the award to school strikers in Lucan Community College on the same day, Monday 16th September. Ahead of the event, Colm O’Gorman, Executive Director of Amnesty Ireland, said “The change these young activists have made in such a short space of time is incredible and awe-inspiring. They truly are leaders in this movement; forcing the climate emergency onto the agenda of governments, their communities and corporations.”