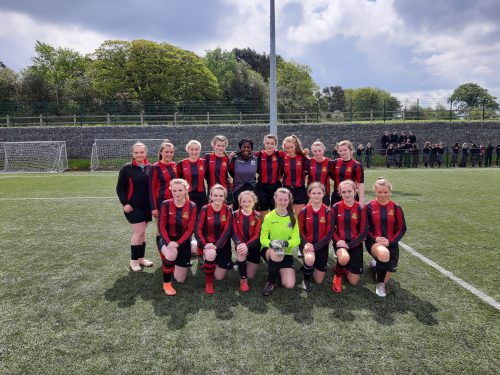 On April 30th the Lucan Community College senior girls soccer team booked their place in the Leinster Division 1 finals and LCC folklore. This was the first time a senior girls soccer team has reached the final stage in over 25 years. No matter what happened next, they were history makers. It was a long wait until the final which was played on Monday, May 20th. The venue was Wayside Celtic in Kilternan, the opposition Gorey Community School, the largest school in Ireland.

Unfortunately for Lucan Community College they did not come out on top the day losing 2-1 to a strong Gorey side. After going 2-0 down in the first half the LCC girls pulled a goal back in the second through Katie O’Connor expertly assisted by captain Nicole Smyth. Regardless of the loss, it has been an extremely successful season for the college playing 7 games, scoring 28 goals and conceding 6.

Well done to their dedicated coaching team of Mr Morris and Ms Dowling for their enthusiasm and dilligent coaching throughout the year.