THE EARLY BIRD CATCHES THE WORM

By Stephen Brett in Language Literacy Numeracy, News on October 8, 2018. 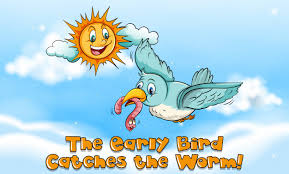 Meaning: This proverb tells you to act early or right now in order to be successful. If someone says, “The early bird catches the worm,” he/she means that if you do something early or before anyone else, you will have an advantage and be successful.

Origin: This phrase THE EARLY BIRD CATCHES THE WORM was first recorded in 1605 in William Camden’s book of proverbs and has remained part of misplaced work ethic ever since.