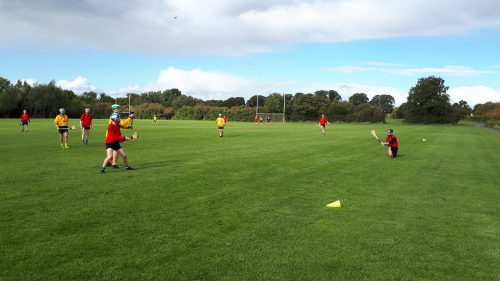 Lucan CC senior hurlers extended their unbeaten run in to a third season with victory over Moyle Park College. A strong wind blowing through Arthur Griffith Park made for an interesting spectacle. Playing with the wind in the first half allowed LCC to build up a comfortable 12 point half time lead. Sean Balfe opened the scoring with a brilliant goal. Charlie Keher scored 2-2 during this period, the second goal coming from a sideline cut.

Aided by the strong wind Moyle Park came back at Lucan in the second half. They created a number of goal scoring opportunities but a mixture of excellent defending and poor shooting confined their scoring to points only. They did manage to outscore Lucan by 5 points during this period. The game finished Lucan CC 3-9 v Moyle Park College 0-11 with Man of the Match Darragh Reid performing excellently throughout.

← He who asks a question is a fool for five minutes; he who does not ask a question remains a fool forever. – Chinese Proverb First Year Enrolment 2020/2021 now open →