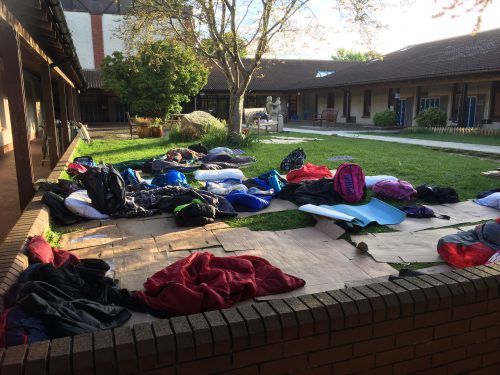 On Friday May 11th, the Amnesty International group in Lucan Community College held our “Annual 12 hour Sponsored Sleep Out” for the fourth time, to raise awareness about the current homeless crisis in Ireland.
It was a great success being our biggest year yet with 34 students, 5 teachers and 4 local councillors and TD’S along with Ibrahim Halawa attending. 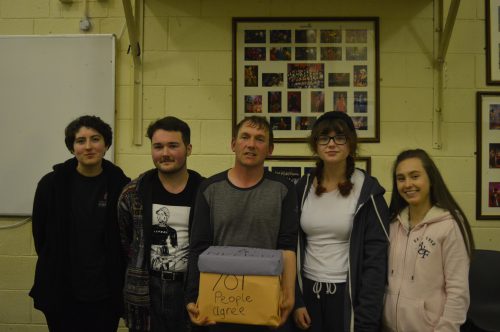 34 senior students slept outside in the school courtyard overnight  from 8pm on Friday 11th to 8am on Saturday the 12th of May. This was to gain an insight into what it’s like to sleep rough, to raise awareness of the housing emergency and to show solidarity with the families, children and individuals affected by it. 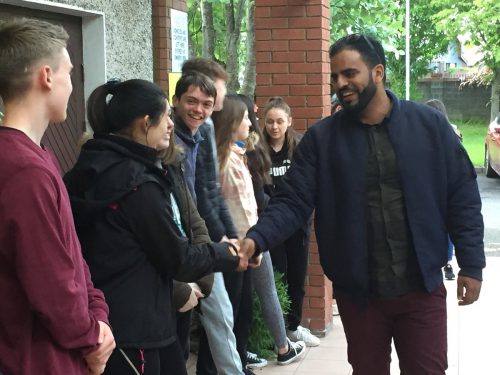 We invited TDs from our constituency and relevant Dáil positions, local Councillors and the Lord Mayor of South Dublin County Council to attend the “Sleep Out”.Mayor Paul Gogarty, Councillor Ruth Nolan, Councillor Guss O’Connell, TD Gino Kenny attended our event on Friday and gave their insight and solutions for the homeless crisis. 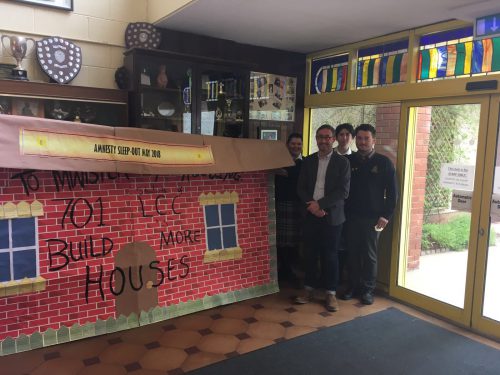 We presented Gino with our box of 701 petitions signed by students and staff.
On Monday 14th of May TD Eoin O’Broin came to our school at lunch to discuss the homeless crisis and hear our views.
Two of our local TD’s Gino Kenny and Eoin O Broin, presented the 701 petitions to Minister for Housing Eoghan Murphy  at Housing Committee Meeting on Thursday May 17th. 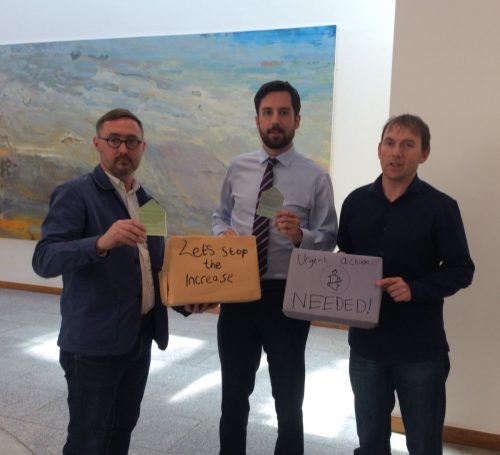 Ibrahim Halawa also attended the event to support our homeless campaign.  He spoke to the students about his experience being unlawfully imprisoned in Egypt and his campaigning for an end to homelessness.
We expressed our views to the TD’s and Councillors asking them to address the humanitarian crisis that is Irish homelessness, by building more social housing and providing more hostel places.
“There is too much talking about the issue and not enough action”said Lucy, 5th year student. “It’s not the problem of the people, but the problem of the government’s inability to handle a crisis.”  Gayatri, 5th year Student. 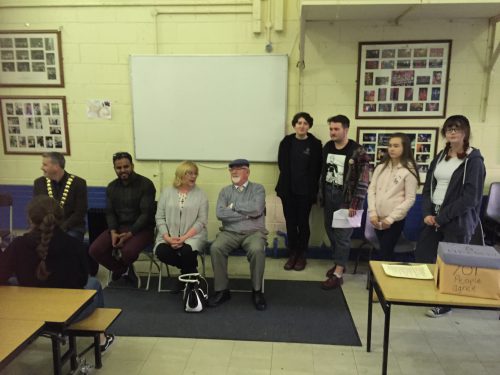 When people think of homelessness they often don’t think of the more hidden forms of homelessness. People often think homelessness is just sleeping rough and don’t think of families living in emergency accommodation, hubs and hotels, people couch surfing, people living in unsafe environments, people in direct provision centres, people sleeping in hospitals, cars and B&Bs.
It is easy to forget about what they can’t see, but these people suffer like any other homeless person and are a victim of a neglectful government and state who do not protect one of the most basic human rights, our rights to housing. “Too many people use negative stereotypes as an excuse not to help vulnerable people”-6th year student.
In 2015, the first year of our LCC Sleep Out, there were 3,625 people homeless and as of March this year 2018, there are 9,681 homeless people recorded in Ireland.
Between July 2014 and February 2018 the number of people recorded as homeless has increased by a shocking 129%, or 6,549 people (Peter McVerry Trust).
Even with the government’s promises of building more houses and social houses, the number of families becoming homeless has increased by over 37% since February 2017 (Focus Ireland). In March 2018, there were 3,646 children in emergency homeless accommodation with their families.
“I should never have sat in a hotel for 3 months, surrounded by tourists staring at me in my school uniform, waiting for a county council to decide they cared about me” -said a student.  Almost three-quarters of homeless young people live in Dublin.
We will continue to campaign until the serious humanitarian crisis of homelessness in Ireland is addressed.
Yours sincerely,

Lee, Naoise and Rhiannon, (students) on behalf of the LCC Amnesty group