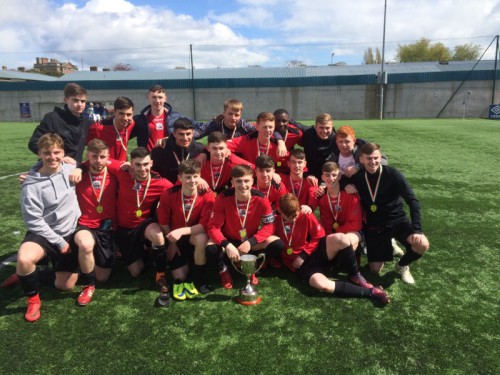 The two teams had already played the previous week in the Leinster Semi-Final in the same venue with Lucan prevailing 6-2 on that day. However, the score line somewhat flattered Lucan as they scored 3 goals late on after a very close match between two very strong footballing teams. 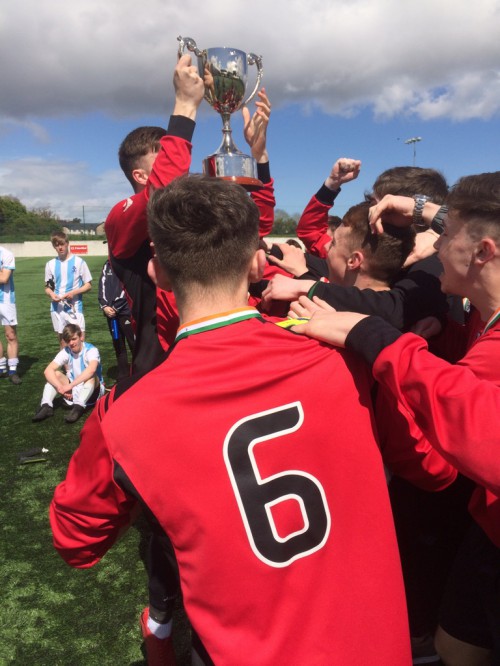 With the two teams meeting again on a fine sunny day in Drumcondra the scene was set for a great match and everyone in attendance was treated to a fantastic spectacle of great football between two very technical teams who love to get the ball down and play. Blackrock kicked off the play and dominated the possession for the first 5 minutes. Lucan worked very hard and worked their way into the match dominating the next twenty minutes of the first half during which they took the lead. Joshua Giurgi and Ciaran Beahan combined excellently down the left side to unleash Ciaran into the opposition box where he dribbled past his man and play a perfect ball across the box for Amos Nohilly to tap home.

The last 20 minutes of the first half were dominated by Blackrock who really put it up to Lucan winning a lot of set pieces and corners. However, Lucan marshalled by Captain Daniel Gaffney, were equal to everything that was thrown at them and defended excellently throughout this period.

The 2nd half got underway with both teams creating chances however it was Lucan who scored the crucial 2nd goal after Joshua Giurgi exquisitely cut the Blackrock defence open with a perfectly timed pass for Daniel Gaffney to run through on the keeper and neatly finish in the far corner. The two players linked up again minutes later to silence the vocal Blackrock supporters with Giurgi again providing the perfect ball for Gaffney to go through on goal where he produced an audacious lobbed finish.

Lucan with their tails now up blitzed through Blackrock creating chance after chance but were denied three times by an excellent goal keeping display from the Blackrock stopper. Then in the final moments Joshua Giurgi struck a superb free kick which beat the keeper and looked to have crossed the line only for the referee to wave play on. However Conor Finn, fresh after coming on as a 2nd half substitute, reacted quickest and poked the ball home to make it 4-0. It is a fantastic achievement from a special team who have now added the Dublin division 1 title to their Dublin West regional title secured earlier in the year. The team have a chance to make it a treble in the one season when they play Boyne CS in the Leinster Senior Division 1 final next Wednesday in Stella Maris.