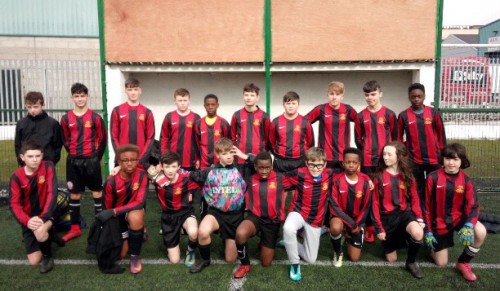 The game was played in prefect conditions in Leixlip United sports ground. These sides had met previously in the opening round of the league where Coolmine proved to be too strong for Lucan, making the most of their home advantage on that day.

This time Lucan were ready for battle and we quick off the mark putting a lot of pressure on the Coolmines defence.

Shane Broderick and Leo Myers dominated the midfield battle and it was only a matter of time until the deadlock was broken.

Paul Gbenle opened the score line for Lucan 25 minutes into the contest after and a shot from Gerard Gorman was blocked by the Coolmine keeper and then finished to the net.

However Coolmine found their rhythm in the second half and scored twice in 20 minutes. Time went against Lucan and Coolmines were crowned West Dublin champs on a score line of 3-1.

It was a terrific performance by the team and despite the result everyone should be very proud of not just reaching the final but by their performance on the day.

A huge thanks must go to managers Mr. Upton and Mr.Spillane for all their time and effort in coaching the team.