By Diane Birnie in Awareness Raising, Building on March 10, 2017. 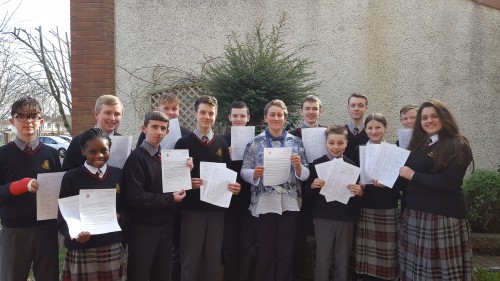 Lucan Community College’s students have gathered over 750 signatures calling for immediate action by the Minister for Education, Richard Bruton, on their ten year wait for their promised school extension. The students have joined together to write a letter to Minister Bruton with signatures from almost the entire student body supporting their call to action.
Lucan Community College’s students are appealing directly to the Minister for Education to take action as the extension has been again delayed in its planning stages. The Student Council organised the letter and signatures as they had become tired of the ridiculous delays that have prevented them from gaining a building suitable for education in the 21st century.
Student Council Chairperson, Ciarán Beahan said “I was in first class in primary school when the extension was first announced and yet here I am in 5th year in Lucan Community College and unbelievably we still do not have our extension”. “We want to finally stop the procrastination by the Department of Education so future generations of students in our school get the building they were promised and deserve”.
The principal of Lucan Community College, Diane Birnie, has supported the action taken by her students as their frustrations have grown over the delayed project. “The students’ independent action represents their part of an on-going whole-school effort. Members the Board of Management and Parents’ Association have also been actively campaigning to ensure the project moves ahead at speed”, said Ms. Birnie. “Our teachers and students work very hard to make Lucan Community College an excellent educational establishment, we hope this amazing effort by our students will finally result in an excellent building those efforts deserve”, explained Ms. Birnie.
The Minister for Education answered questions recently in the Dáil about the delayed extension for Lucan. In response to questions raised by local TD, Gino Kenny, the minister said that once Lucan Community College’s extension passes the various planning phases his department will prioritize funding for the project.
The students in Lucan Community College hope that the Minister for Education backs up his words with action as they look for a positive and swift conclusion to their decade long wait for a modern school building.