By Diane Birnie in Educational visits, History on December 7, 2016.

On Friday October 21st, a group of 50 First Year students climbed Montpellier Hill to the site of an archaeological dig taking place next to the famous ‘Hell fire Club’. There they were met by archaeologist Neil Jackman and his team from Amarta Heritage who explained to them that they were excavating the site of a Neolithic Passage Grave dating back about 5,000 years (i.e. a tomb which would have been similar to Newgrange at one point). The students were able to see the dig in action, the tools being used, the procedures and methodology being followed and had a Q and A session with Neil at the site. He showed them a Polished Stone Axe discovered just a couple of days previously. This was a wonderful opportunity for our History students who cover the topic of an Archaeologist on a dig as part of their Junior Cert History course. Thanks to Mr Byrne and Ms Hayes for bringing the students on this trip. 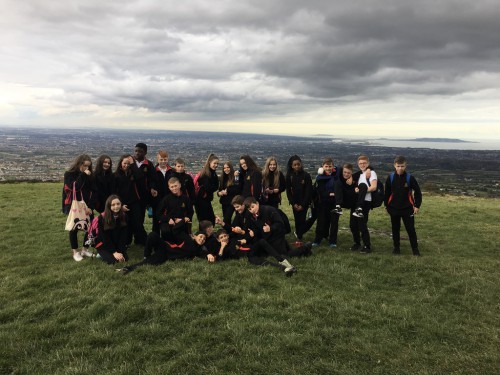 The excitement is palpable! Our students have arrived for the Graduation Ceremony of Class of 2022! Have a fantastic evening!! @ddletb @LccAssoc @LearningLucanCC

Well done to TY #GlobalCitizenship class for great participation on field trip to @RediscoveryCtr. Thanks Cillian, Ali & Rossa for interesting tour + workshop on #SustainableFood #ClimateActionNow and to ⁦@WorldWise_Irl⁩ for support ⁦⁦@ddletb⁩ ⁦@LccAssoc⁩