By Andrew Purcell in Events, Sport, Uncategorized on January 21, 2015. 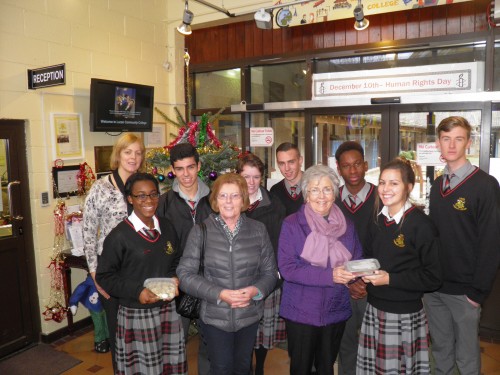 Below are some highlights of our very successful extra-curricular programme so far this year … Well done and thank you to all  students who participated in these events and to their teachers also.

Very successful choir and carol services for Christmas time events in December – thank you to the Music and R.E. teachers and students.

Mr. Byrne reports that the Senior boys rugby team is the most successful to date in the school.   They played some outstanding matches to get to the semi-final of the ‘A’ Development Cup where they were narrowly defeated by Dundalk Grammar School.    Outstanding performers included John McMurray, David Solanke, Shane Dardis, Aaron Garrigan, and Daniel Forde – who also scored two of our tries.

Meanwhile, Transition Year German students watched the movie ‘Jumanji’ here in German, while they continue to prepare for the German Exchange trip to Munchberg on 6th February.    The French Trip to Paris takes place on March 20-23rd.

Students interested in Gluais will have a guest speaker shortly as the selection process for next years Gluais team will begin shortly.  The chosen members will have Gluais training over the Easter holidays.

Badminton players are also very successful with both the U-14 and U-16 girls teams in finals, and the U-14 boys team in an effective qualifier match for the finals.  Senior Badminton boys were narrowly defeated in the semi-finals. Thanks to Ms Gallagher and In Ni Riain.

U-16 Gaelic players did very well in their group, with the assistance of Mr. Grimes.     U-18’s, with Mr. McGowan, succumbed to Storm Rachel – literally, as both players and teachers showed all the signs of the dreadful conditions after the game!   That was a big disappointment, losing a ¼ final to Terenure College.

U-14 Gaelic were similarly narrowly defeated in a final last Friday.  Ms. Casey wishes to congratulate Mr. Carey and the students for their dedication and great effort.

Mr. O’Gorman took U-19 soccer players to an All-Ireland League Final to be – yet again – narrowly defeated –this time on penalties (the word “robbed” has been suggested!) by Patrician College Newbridge..

Mr. Mulready reports that there is an U-14 camogie competition starting this week.

A poetry competition is also due to start soon, for St. Valentine’s Day!