By Andrew Purcell in Events, Uncategorized on December 16, 2014.

Amnesty International group in Lucan Community College organised events to celebrate Human Rights Day on December 10th 2014, the 66th anniversary of the Universal Declaration of Human Rights. The events included a bake sale, Write for Rights Campaign, a lantern display, poetry competitions and selling wristbands to fundraise for Amnesty International. The Write for Rights Campaign highlighted the cases of the Chinese human rights activist Liu Ping and the Justice for Bhopal Victims of Toxic Gas Leak. 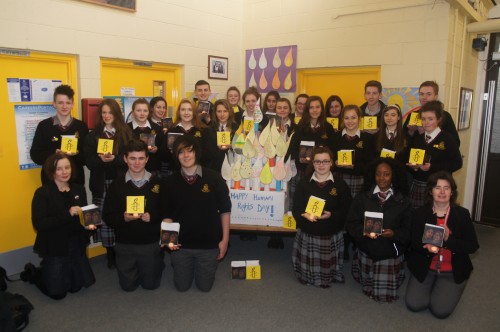 Congratulations to the following students who placed in the Cross-Country race in Phoenix Park - Grace Hughes, Ferdia McDonagh, Rachel Jez, Clodagh Conway, Reka Kiss Kallo and Eve Clarke. Well done to all who competed on the day! @LccAssoc

Yesterday Ms Freeman invited two past pupils from Lucan Community College back as guest speakers for the LCVP and TY Enterprise Classes. We were delighted to welcome Aine Kennedy (Smooth Company) and Jack Tuite (Fit for 45) back to inspire the entrepreneurs of the future!

OPEN DAY!🏫Tomorrow we welcome pupils of 5th/6th class along with their parents/guardians into our school to sample what we have to offer here in Lucan Community College. Information on Admissions/Enrolment can be found here: http://shorturl.at/aOQRS @ddletb @LccAssoc